Posted on October 30, 2015 by Colonial Insurance

Among commercial truckers, Atlanta has a reputation for having one of the most dangerous highway systems in the country, with over 200 trucking rollovers recorded since 2001, according to a study by the American Transportation Research Institute. This problem has arisen because Atlanta requires commercial truckers driving through Atlanta (not into Atlanta) to use Interstate 285, Atlanta’s perimeter highway, which intersects I-20, I-75, I-85, and I-675. I-285 is home to some of the most treacherous exit ramps in the United States.

Interstate 285 has become one of the most dangerous highways for commercial truck drivers, and for good reason: there have been over 150 large truck rollovers recorded on I-285 since 2001. While the negligence of truck drivers is frequently to blame for trucking rollovers, Atlanta’s highway system has drawn criticism for years by both commercial truckers and local residents and has undoubtedly contributed to the damages and fatalities resulting from commercial truck accidents.

The United States interstate highway system was designed in the mid-1950s, and thus its design doesn’t take the commercial trucking industry into account. Atlanta’s top 10 rollover sites all involve exit ramps that require a rapid reduction in speed, and Georgia has been criticized for lacking warning signs / flashing lights to inform commercial truckers.

One part of Atlanta’s highway system which is particularly troublesome is the ramp from I-285 South to I-20 East, which some truckers have described as an “optical illusion”. Truckers approach the ramp, which has a recommended speed of 35mph, after a long straight-away. There is one lane of highway to the driver’s right that continues straight, but it is separated by a median wall. Truck drivers see that lane and assume that the highway continues straight. Most truck rollovers have occurred near the beginning of the ramp, which implies the ramp is taking truckers by surprise – they don’t realize they’re supposed to be veering left until it’s already too late.

This ramp has been responsible for at least 10 trucking rollovers in the past two years, including five rollovers from November 2015 – January 2015 alone. This resulted in a flurry of media attention from local news outlets highlighting the dangers of this exit ramp in particular. As a result, the GDOT installed six truck tip-over signs along with speed advisory signs and flashing lights during the summer of 2015 to help reduce the risk of accidents.

According to the Atlanta Transportation Research Institute, the most common rollover locations in Georgia for commercial truckers from 2001 – 2012 are as follows:

What can truckers do to protect themselves?

When a truck’s freight breaks loose and starts sliding, there’s little a trucker can do to prevent or mitigate the damage of an accident. Simply put, reducing the number of rollover incidents in the Atlanta area must be a combined effort between individual truckers and the GDOT.

Truckers should ensure that loads are secured completely because shifting loads will increase the risk of rollovers. They must also take into consideration that Atlanta is one of the busiest transportation hubs in the United States and take extra caution when navigating its highway system. Pay close attention especially when merging from highway to highway at the points listed above.

The GDOT must make efforts to install adequate warning signage at all of the major trucking rollover locations – not just the ones that receive significant media coverage – because warning signs help to save lives and reduce the expense of costly cleanups.

In June, the National Highway Traffic Safety Administration (NHTSA) mandated a new federal requirement for electronic stability control (ESC) on most new truck tractors starting in 2017 and for the excluded types in 2019, which it estimates could prevent up to 1,759 crashed, 649 injuries and 49 deaths each year.

This entry was posted in Trucking Safety / Regulations. Bookmark the permalink. 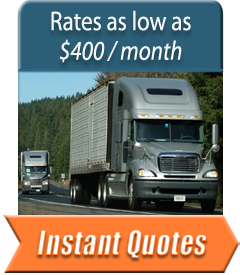 We can provide the following types of truck insurance:

We can provide trucking insurance for:

Some coverage programs can include:

Ready to get started on your quote? Start Your Quote

Colonial Trucking Insurance offers a complete range of affordable truck insurance to truck owner-operators and fleets. We are one of the most experienced commercial trucking insurance agents in the country.